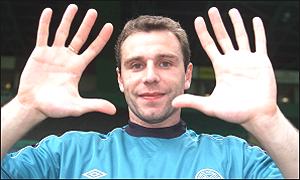 Player sales: Valencia to Sporting Lesbian for £0.5m, Barkley to FCT for £0.5m

Season preview in one sentence (on 27 September): When a manager Brambles himself with two Read Madrid players, what further punishment can Kenna HQ mete out?

Season preview in one sentence: Led the Kenna for a period of last season before falling into mid-table obscurity, and appears to have assembled a side capable of doing the same again.

Outlook (on 24 August 2013): Detractors would say he’s never won any silverware, not even a Manager of the Month award. Apologists would argue he’s never been relegated or even got a Turkey of the Month award. Everyone would agree the Kenna career of the Headless Chickens manager has been one of absolute mediocrity, and the stats back this up.

In his third attempt to win, well, anything, the Chickens boss picked up one of the bargains of the auction in Yaya Touré for half a million. Fortunate, since the rest of the midfield look unable to score points at this level – Schneiderlin plays in the holding role, Gardner plays in defence and Sigurdsson rarely plays at all.

Further uncertainty hangs over the front pair. Will Michu continue to enjoy the rich vein of form that saw him score 19 goals last season? Will Craig Bellamy take a five iron to his team mates?

At the back things look more solid, and not just because they have an extra right back in Gardner. Cole, Baines, McAuley and Bassong are likely to start almost every game this season. The Szczesny circus act looks set to continue.

Perhaps where the Chickens manager needs to be most careful is the transfer window. Last October he jettisoned a performing Theo Walcott in favour of Raheem Sterling. Walcott ended the season as one of the top midfielders with 179 points. Sterling scored a below-par 68.

He may as well have used Bellamy’s golf clubs.

Outlook: Beyond Cech, Kompany and Walcott, the Chickens boss doesn’t look like having the tools to better last season. Marquee signing Clint Dempsey is ‘unsettled’ and looking to swap his role as a big fish in a little pond for minnow in the sea of Liverpool midfielders. Caroll and Cole up front are fully expected to warrant their price tag.